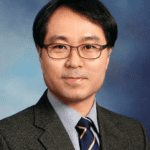 Sang J. Chung graduated from Department of Pharmacy, Sungkyunkwan University, Suwon, Korea in 1990, and received his Ph.D. in Organic Chemistry from POSTECH, Korea, in 1996. He did his postdoctoral work with Prof. Chi-Huey Wong at The Scripps Research Institute and Prof. Gregory Verdine at Harvard University. During the postdoctoral research he studied Carbohydrate Chemistry and Structural and Molecular Biology. In 2003, he was appointed a Senior Scientist at KRIBB, Daejeon, Korea and promoted to a Principal Scientist in 2009. In March 2013, he moved to Dongguk University, Seoul, Korea as an Associate Professor of Chemistry Department and director of Molecular Targeting Research Center of Dongguk University. In 2016, he founded an ADC company, AbTis and has worked as CEO of the company. In July 2017, he moved back to the School of Pharmacy, Sungkyunkwan University as a Professor of Chemical Biology and has been running Chemical Biology Laboratory at Sungkyunkwan University. His research focuses on Chemical Biology including ADC cross-linking technology, protein (structural proteins, enzymes, antibodies, etc.) engineering, development of HTS and natural product screening, enzyme kinetics, preparation of druggable peptide library, etc of which tools are based on Organic Chemistry and Structural & Molecular Biology.